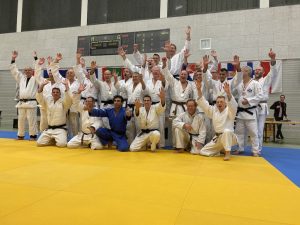 223 registered launches from 19 nations were on the mat this year (236 starts in 2018). With 75 clubs represented, it was slightly less than last year. With almost 50% foreign starters, well mixed games were mustered. Even referees lacked not on the 4 Tatamis. Both experienced IJF referees and junior referees were allowed to direct the battles at international veteran level.

Men
In the men over 40 to 81kg, Tomasz of Judo Gwarda Koszalin has made the first place. Had he been suspended in 2018, he showed after two years that he is also in the over 30 absolutely fit for a double start and still feels
comfortable there. In the class of 7 fighters he took first place. Martin Mairhofer from SV Gallneukirchen made a double start in the open age class and in the over 30. The Vice European Champion 2019 of the Masters of Gran Canaria, proved that he is in the 90kg class at home and there is the number one. As in 2018, the Austrian "Moarli", as his club mates call him, took 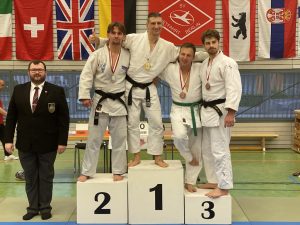 first place in both classes. Judoka from the Faroe Islands took part for the first time and did quite well. Both Jogvan Pall and Peter-Sigurd made a double start in the open age class and about 30 to 73kg and up to 100kg. Jogvanwent home with 2x bronze, Peter-Sigurd with 1 x gold and 1 x bronze. An original rock in the air Masters is now Jens-Peter Bischof, he brings the last few years not only titles at European and World Championships Masters, but he also fought his way always a podium finish at the Judo Luftfahrt Masters Berlin. With a double start in the age class over 30 and over 40, Jens-Peter took 1st place this year. Closely followed by heavyweight opponent Sebastian Hesse. With a double start he was able to get only silver in the over 30 against Jens-Peter(in 2018 still gold), but he won the first place in the open age class. Among the men from 40 to 73kg, the Serb and European Veteran Champion of 2018 secured Marko Mijalkovic, the first place. In the over 50 to 60kg, Italian Veteran European Veteran Champion 2019 Antiono Lo Monaco won the first place. Right behind in second place is Michael Traus, who actually fights in the over 60 and made the first place there later. Up to 90kg, in the over 50 and over 60, the European Champion of the Veterans of 2018 and 2019 as well as reigning Vice World Champion Veterans Theodor Keppel could secure first place. Inferior to him in the over 50 was Vice-European and Vice-World Champion of the Veterans of 2017 Olaf Rodewald, with second place he is still lucky. For Olaf made up to 90kg in the over 50 first place. Not so lucky was Tono Messing from JC Tervuren. If he had to give up second place in the + 100kg class of the over 40 class against Jens-Peter, he could not get past Guido Bars in the over 50 class. Thus 2x silver for Tono in the over 40 and over 50 + 100kg. In the now well-occupied over 60 made the Veteran World Champion and European Champion of 2018 Manfred Zöllner and Veteran European Champion of 2018 Wolfgang Löffler each first place in their weight category up to 73kg and up to 81kg.

Women
Ines Rockstuhl of the Mattenteufel Erfurt should probably have enjoyed this Saturday the most at the ladies. In her age class +45 she fought her way up the podium in the pool of four. Even 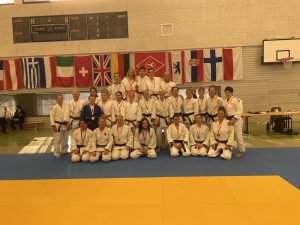 with the younger +30 she won the pool of 3 and was thus twice in 1st place. The European Veteran Champion of 2018 Romy Mücke secured first place in the over 30 to 57kg. Current Vice World Champion Veteran 2019 Simone Glenz won gold in the women's +30 to 63kg. For the judoka Jacqueline Liebing it should have been a successful result. In her first participation, the Niedersächsin won only second place in her age class +45, but instead she won the first place in the heavily occupied +30 ladies up to 70kg. The Chemnitz woman Clarissa Peick had at this year's European and World Veterans Championships each second place in the Judo Luftfahrt Masters she sat on it and took gold. As in 2018, the POST SV Bamberg has successfully launched an entire family. So mother Michaela Gehring was a role model to her two daughters and made the 1st place in the +45 to 70kg. She defended her title from last year. Both daughters in the u18 also took the 1st place. Theresa Gehring also defended her title from last year to 52kg, Marlene Gehring, however, was able to improve after finishing second in 2018 this year and finally get the title. Gisela Sachse also showed constant performance, after 2016 and 2018 she was again in 1st place in 2019. The spanish women Miriam Moreno should have happily gone home. After her double start in the open age class and +30 and 52kg, she held gold and silver in her hands.

Teams
In the men's race, the Spaniards were not so strong this year. Also the Gallneukirchner from Austria were weakly represented and had to give up their title. The Wittenbergers from the Grün-Weiss Wittenberg-Piesteritz formed this year to a high-ranking troop and took home the Team Cup. 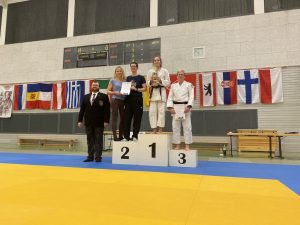 Behind them were the men of Gwarda Koszalin, despite a break last year. For the ladies, the Gehring family from Post SV Bambergare allowed to put the Team Cup in the showcase, with their placements you could face the women's teams from PSV Olympia Berlin and Mattenteufel Erfurt.

Conclusion
In the higher age groups, one is not tired for a long time. Both in the 50's and 60's classes, many of them competed in a lower age group ... even successfully and without injury. Judoka from Faroe Islands and Moldova had two new participating nations. It was surprising that the Faroes are so strong. It was technically good fights to see them, we hope to see them again next year. We were also pleased this year that there were no serious injuries. We are proud to see so many international successful Judoka on the mat. Thus the judoka, who do not have the opportunity to travel to international competitions, can compete against other nations. The tournament is now an integral part of many Judoka from 30 and fixed in their calendar. Usually the partially long journey is combined with a nice weekend in Berlin. With the good connection to the airport Berlin-Schoenefeld, Berlin has a good location regarding the accessibility by plane from all over Europe.